Aug 1887 Born in Whiteinch, Lanarkshire, Scotland, a District in the West of Glasgow. 1887 Born the youngest of 3 siblings, to James and Grace (Morrison) Armour 1891 After his father became unemployed from his Ships Joiner position in Glasgow Shipyards, the family moved back to their original hometown of Greenock. 1891 Settled into Dalrymple Street, Greenock, Renfrew, Scotland with his parents, Brother (James) and two sisters (Grace and Janet) 1902 At 15 years old John was employed as a van man at the Caddlehill Steam Laundry Co, 55 Kelly st, Greenock, delivering linen around the west coast. 18 December 1905 Joined the Army, Service No 10115 18 December 1905 Assigned to the Argyll and Sutherland Highlanders (Princess Louise's) - 91st & 93rd Foot and sent to Fort George in Inverness for basic training. Deployed to South Africa where he joined the rest of the 2nd battalion who were already garrisoned near Pretoria in the Eastern Transvaaas, serving as additional Security at end of Boar War, the battalion came under the command of Brigadier General George Cunningham. Sections of Argyll's formed parts of the 2nd and 12th Battalions Mounted Infantry detachment, along with the Black Watch, formed an escort for Captain J E Bearcroft's naval guns during the advance to Pretoria. 01 February 1910 2nd Battalion returned to the UK in 1910 after service in South Africa 04 March 1910 Married Martha Thompson at St Stephens church in Greenock. 11 February 1911 After failing to gain employment Johns father James was admitted to the Smithston Hospital, Inverkip Road, Greenock (Poor house / Asylum) where he was classified as "Lunatic" James died shortly after admission. Lived at No 60, The Vennel, Greenock, now the site of High street, on the junction with Smith Street. 12 April 1914 Wife Martha gave birth to a son (James Thompson Armour) 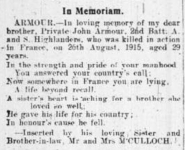 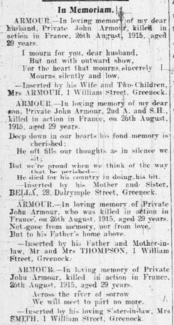 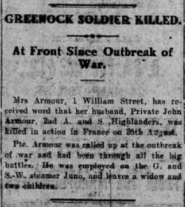 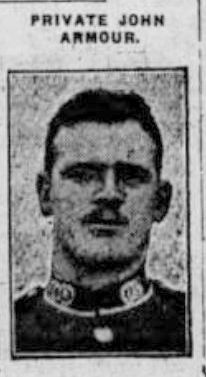