“You will never make a soldier of me!” 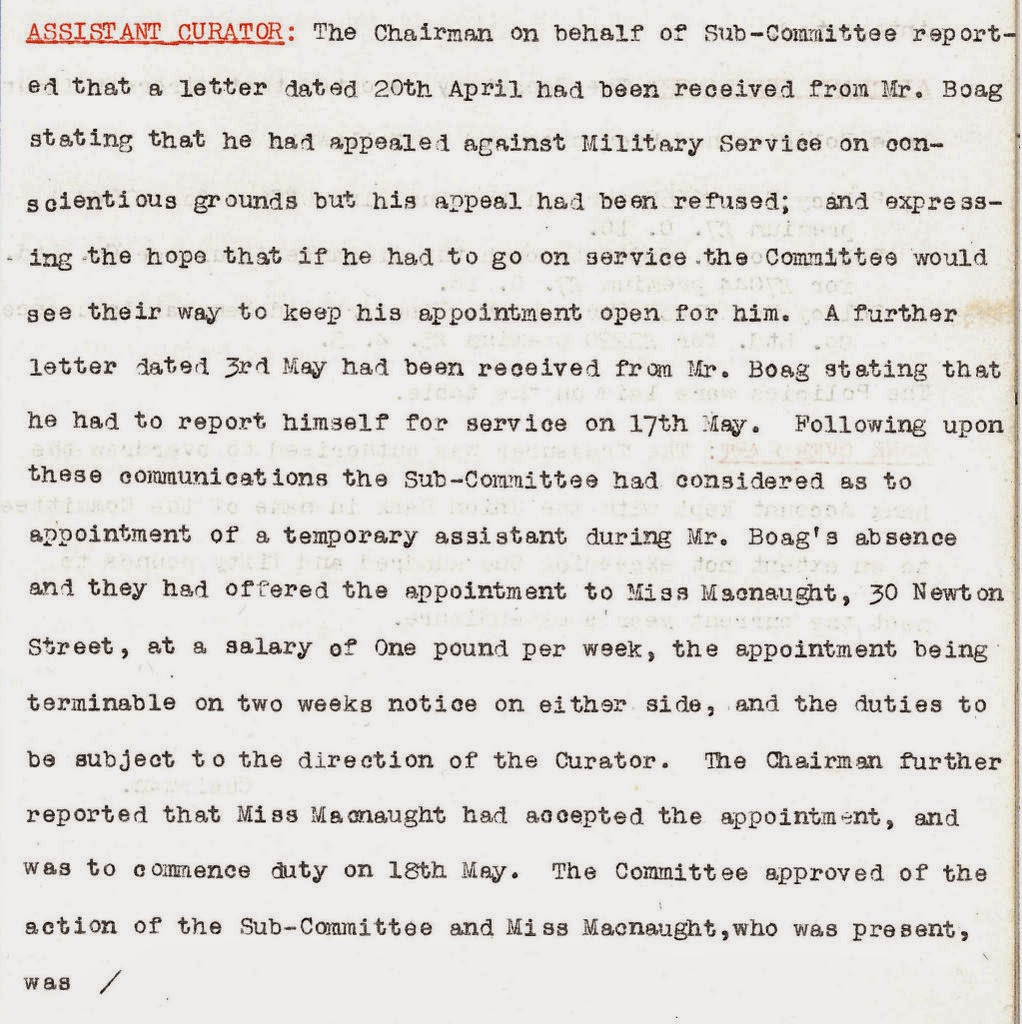 In 1914 William Boag was working in the McLean Museum as an Assistant Curator. He was a cabinetmaker to trade. He said “The Territorial Army were all mobilised and many were the questionings and wonderings as to why they had been selected. It had gone on so long, year in year out, so many drills, so much money, so many holidays at camp, why it had become a part of their life, and why it had, no one seemed to think why. But the thunderbolt came and there was a great thud with the result that many a young man was swept completely off his feet. Of course it was all voluntary but then it was the awkward position into which one
was put. Undoubtedly the country claim was the most important and everyone was anxious to do something for his or her country, but the trouble was that we could only do one thing for our country, and that was – Join up.”

At the end of 1915 every able man had to sign up for service, in order to fill the ranks of the fallen. In April, William applied to the Museum Committee, asking that should he be called up, that his job be kept open for him when he returned. This was agreed. He recalls “In the meantime we had to leave our employment as it was unlawful for an employer to engage any one that was wanted by the military. So the police were the next to give us a call on 20th June to ascertain our reasons for not reporting and at 5.30 the following morning two kindly policemen called to arrest us. They were good enough to let us walk down in front of them, and we were put in a room with a big roasting fire, while to our surprise the other members of the group had been arrested earlier in the morning and were awaiting our arrival. In the forenoon we were brought before the Police Court with Sir Hugh Shaw Stewart presiding,

Mr John Cameron conducted the prosecution, seven Conscientious Objectors in all appeared and pleaded not guilty.”
William had been attending meetings of the Society of Friends – the Quakers, along with his brother Robert, and several other Greenock men. They all refused to join up – “declaring all war to be inconsistent with the teaching of Christ and being fully convinced of the sacredness of human life, and also bearing in mind the Divine Command “Thou shall not kill” I must therefore refuse to take part in that which means the inflicting of death and consequent engendering of hatred and bitterness between nations. In regard to non-combatant duties I would also claim exemption from undertaking same, under a Military Oath which necessitate obedience to all orders and makes one part of the military machine, such action on my part tending to make the work of killing more efficient. In putting forward these my main reasons I do so under the firm belief that in no other way can the principles of Universal Brotherhood be attained.”

“On 29th February 1916 and on 17th March we were to appear before the Local tribunal at 3.20 pm in the Council Hall Municipal Buildings. The Tribunal consisted of Bailie Carmichael, Baxter, Lemmon, McCallum, Orr etc.& Col Lamont as Military Representative. The latter was said to have been a Colonel in the old
Volunteers, we feel his experiences were confined to a time of No More War in the Camps at the pleasure resorts, just like quite a number more who understood soldiering as a Back Straightener. He was also a very prominent speaker in the Working Boys & Girls Religious Society but he was pretty harsh and like Shylock claimed his pound of flesh” After several appeals the men were sent to Hamilton Barracks – here they were given uniforms – which they put on under protest. Refusing to obey orders they were then court martialled where they were sentenced to 6 months hard labour at Barlinnie Prison. They were then offered punitive  work in the Home Office Scheme for the Employment of C.O.’s if they passed a test of their objections. The ‘Greenock 8’, namely, the Boag brothers, William Brown, William Johnstone, David Miller, William Booth Ogilvie, William James Spiers, and Barclay Stephenson, were among those who passed the test, being placed in classified Group A, as ‘men who should undoubtedly be treated as having a conscientious objection to all military service’. Thereafter they were sent to a work camp in Wigtown and finally to Wakefield Prison and other work camps in England. 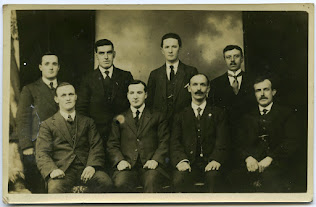 We were a sight for many curious minded people but we arrived alright at Wigtown and found very comfortable apartments awaiting for us and many generous hearted people. Our work here was felling trees the wood of which was to be used as pit props.”
Life in the work camps was austere but the men made the most of it. They organised football matches, put on plays and held concert parties. William continued to take part in the campaign for the rights of Conscientious Objectors. Many of the absolutist objectors – those who refused to do anything related to contribute to the war effort - suffered terribly – being exposed to all sorts of ill treatment, as well as in some cases being sentenced to death. The local newspapers were full of letters and comment on the ‘slackers’. Despite what people may think about their stance, it must have taken great bravery and mental fortitude to stick to their
principles. 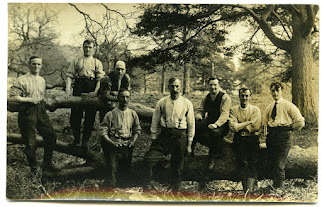 The men spent the war in various camps throughout the UK until the war ended. The McLean Museum committee met not long after William’s arrest and decided that they were no longer obliged to keep the job open. In the years following the war William Boag applied for a job at the Museum on two separate occasions – he was unsuccessful.
Letters to the Telegraph 1916
Conscientious objectors have by their own outrageous statements brought their troubles upon themselves. What sort of conscience is it that would not permit a man to succour the suffering, protect the weak and comfort the dying? These men condemn themselves out of their own mouths, and forfeit every claim to respect and sympathy. Not content with refusing to help their country in her direst hour of need, some of these conscientious objectors have been slandering our brave British soldiers who are shedding their blood for out protection. For many weary months our bravest and best have been enduring untold hardships for the
ideals of honour, chivalry and liberty. They have cheerfully faced injury, disease and death and many have found a grave on the battlefield. And now some gritless, back-bone less individuals with a cotton-wool faculty they call a conscience, come forward to brand them criminals.

Ma Conscience
Sir- Would it not be a good thing if the Tribunals dealing with the ‘conscientious’ ones et hoc genus omne were given power to ‘deport’ them? If we are not willing to work it follows that we have no right to eat, and the logical conclusion with regard to shirkers of whatever brand is that he should not be allowed to live and loaf in a country for which he is unwilling to fight. It is not fair that a great many of us should have sacrificed our boys that these louts should walk around in comfort. ‘Munitions Work’ cloaks far too many young fellows in the yards, as one with only half an eye can see. There should be a lot of clearing out, among the quill drivers
especially, as with a very short training girls could not possibly make a worse show than some of them do whose work I have to look at from time to time. But after all, the only cure that I can see will do any good, and that is to clear them out the country if they will not do their share.