Son of Finlay and Agnes McQuistan

Part of the Highland Howitzers - transferred to RFC in 1916

On 26 June 1916, he was seconded from duty with the III Highland (Howitzer) Brigade, Royal Field Artillery, part of the 51st (Highland) Division, to the Royal Flying Corps as a second lieutenant and flying officer. He was assigned to No. 12 Squadron to fly a B.E.2 two-seater reconnaissance machine. A wounding in September ended this posting.

His next assignment, in March 1917, was to No. 55 Squadron. On 9 June, he used a two-seater Airco DH.4 to score his first victory, being wounded again in the process. On 27 June, he was promoted to lieutenant, and 25 August, was appointed a flight commander with the temporary rank of captain.

On 1 March 1918, he reverted from the post of flight commander and rank of captain, with his seniority set back to 26 June 1916. This was probably as a result of transferring to No. 19 Squadron, where he could fly the new Sopwith Dolphin single-seat fighter. On 17 May, he scored his second victory. He was appointed flight commander and temporary captain again on 9 August, and by 5 October, he had added nine more victories, only one of which was a shared, with Gordon Budd Irving, John De Pencier, and Cecil Gardner. McQuistan's final tally was two German fighters set afire, another German aircraft destroyed, and eight sent down out of control.

"By his example of determination and courage Capt. McQuistan has inspired the greatest confidence in the other pilots of his squadron. He has led over 30 squadron offensive patrols, and the success attained by his squadron during the past three months is largely due to his skilful leadership. This officer has destroyed or driven down out of control nine enemy machines 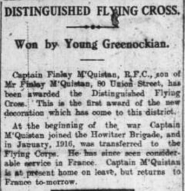 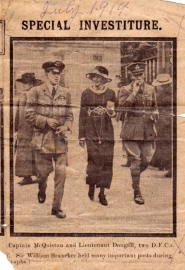