During the Disruption of the “Church” Saint Andrew’s became a U.F church with them continuing to worship in the Argyle Street Church but with on going major repairs to this building they were forced to look for a new building. It was established that there were possibly two sites one being at the corner of North West corner of Newark Street and Johnstone Street and the other at the North West Corner of Ardgowan Street and Margaret Street . Due to the site at the West corner of Newark Street and Johnstone Street not being for sale the plot of land on Ardgowan Street was purchased and the New Saint Andrew’s was subsequently built for a cost of £10,500. The origin Argyle Street Church Site was sold off and to-day the original building is used for a cut-price furniture and carpet store. In 1967, Saint Andrew is united with Trinity Church at which time Trinity Church was renamed Saint Andrew’s Church with the building in Ardgowan Street being demolished and private houses erected on the site.

We cannot 100% guarantee that we have identified the men on this memorial but we have tried our best. We cannot establish who exactly the James Wilson is 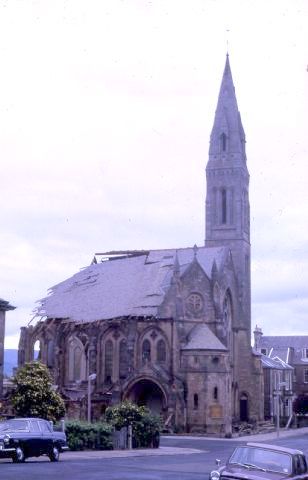