Samuel Graham was an industrial chemist in the sugar industry when he joined the Scots Guards in 1915.  Shortly afterwards he was transferred to the Royal Engineers.  He served in France for a couple of years. It would appear that Samuel was then transferred out of military service into the Munitions Factory at Avonmouth as part of the Special Brigade.  This factory was very hush hush with all employees having to sign the Official Secrets Act.  Later discoveries have shown that the factory as well as making bombs and other ammunition manufactured mustard gas.  It was the centre for chemical warfare manufacture in Britain. The plant made 20 tons of mustard gas a day.  The factory had its own hospital, records show that the hospital dealt with numerous casualties one of whom was Samuel.  Samuel died from “general blood poisoning following the accidental inhalation of and burning by hydrogen sulphide gas”.  The Royal Engineers presented the plaque on his stone to his family. 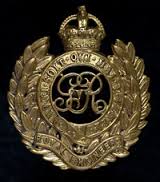