William was the eldest son of Daniel and Mary Ryan of Cove Road, Tramore, Co. Waterford. Brother to James, Hannah, Mary, Daniel, Edward, Joseph and Ellen. He attended Catholic seminary at St. Johns College, Waterford and was a priest in Carrick-on-Suir before coming to Greenock c.1912 as one of  Canon Houlihans assistants at St. Marys Church. William was a firm favourite of St. Marys parishioners  due to “his kindly nature, marked generosity, and devotion to duty”.

OBE (Order of the British Empire)

William was compelled to join the army after seeing the vast numbers of his congregation that rallied to join the colours. In April 1915, after three years at St. Marys he was appointed to the army chaplaincy. He soon found himself being sent to France with the 1st West Riding Field Ambulance and was seen off at Central station in May 1915 by many of those associated with St. Marys. An event that warranted its own newspaper report. He was later transferred to Royal Munster Fusiliers and it was during his time with them in December 1916 he was injured. It would appear that his injuries were not severe as there was a newspaper report mentioning his “narrow escape” and how four men were killed in the dressing station after he had left it. William tells how when he visits his men he is “frequently in full view of the Germans, and only about 400 yards away from them”.

During his time at the front he would often encounter his old parishioners  and they would write home about how “delighted” they were to see him. One soldier was surprised when he entered a barn and found that William was leading the congregation. The soldier wrote to his friends that it “twas jist like being at home”. It would appear that Williams presence was a comfort to a great many. William was twice mentioned in dispatches for bravery and is believed to have won an O.B.E. However after the war nothing is known about him. 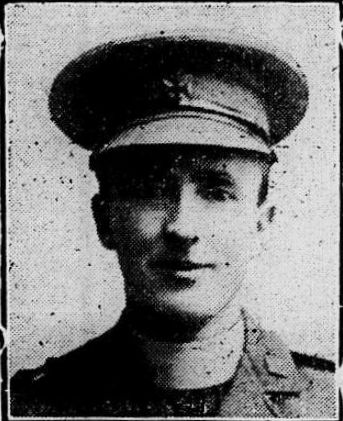