Isabella  (or ‘Bella’ as she was listed on the 1891 census) was the daughter of  Captain Peter and Isabella  Meldrum, 29 Ardgowan Street, Greenock. She had two brothers and two sisters. Her father  was a ship owner in Greenock but a number of tragedies befell the family and both parents were dead by 1898 as was one of Bella's brothers.  As a child she attended school at Greenock Academy and before training to be a nurse at the London Hospital and the Victoria Infirmary, Glasgow, she ran a boarding house at 42 Hill Street, Glasgow and her sister Mary lodged with her here.

Bella was mobilised at the beginning of the war as at the time she was working as a private nurse and was posted to Stobhill 3rd Scottish Territorial Hospital. She was one of 240 Territorial Force Nurses and volunteers who cared for over 1000 patients at a time who were suffering from battlefield wounds. Bella was described as “steadfast and devoted to her duty” and that “conscientious in her work, faithfulness and loyalty to her country were her chief characteristics”.  Even during her spare time she concerned herself with the soldiers wellbeing and procure flowers or treats for them and did little acts of kindness to make them happier. Unfortunately she caught pneumonia arising from her military service and died after a short illness.

Bella’s funeral took place with full military honours in Greenock. The coffin was covered with a Union Jack, a firing party from Fort Matilda, and many beautiful wreaths. The pall bearers were six ward   sisters and her own sisters. Her funeral was attended by Miss Thomson, Matron of the 3rd Scottish Territorial Hospital, Colonel Napier her ward doctor, the Chaplain, sisters, nurses, a contingent of wounded soldiers from Stobhill, her relations and friends. She sadly is not remembered on the Greenock War Memorial but she is on the Memorial to the 40 Scottish Nurses who died in the Great War at St Giles Cathedral, Edinburgh and the 5 Sisters Window at York Minster. 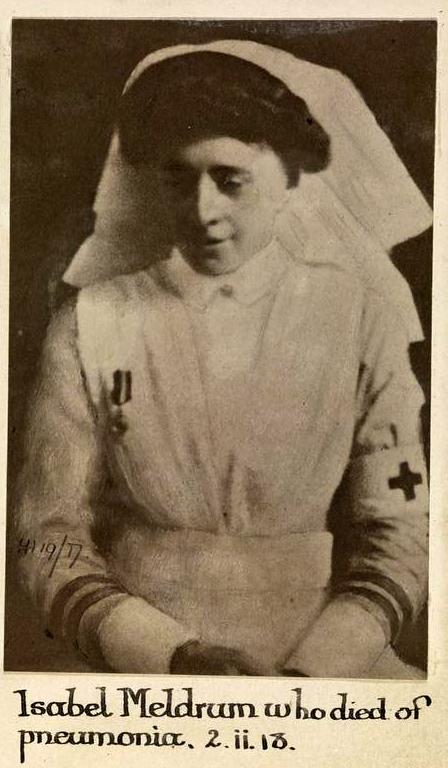