Grandson of Abram Lyle, son of William Park Lyle. Lieutenant Colonel William Lyle was one of the most senior British officers killed on the first day of the Battle of the Somme – 1 July 1916.

He was commanding the 23rd Battalion Northumberland Fusiliers (4th Tyneside Scottish) which suffered 686 casualties that day.

Part of the 34th Division, Lyle’s battalion had the objective of La Boisselle village and had to cross around 500 yards of open ground that was covered by largely intact German machine gun positions.

Advancing at a walk towards largely uncut wire the Tynesiders were mown down. Lyle presumably set off at their head and rapidly became one of the casualties.

The other three battalions of the Tyneside Scottish were also involved in the same attack and each lost more than 500 men killed, wounded and missing.

A large Celtic-style cross in Hampstead cemetery, London, commemorates Lt-col Lyle’s mother Jane, his father and himself. Their family was one half of Tate & Lyle sugar.

Lt-col Lyle is also commemorated by a memorial window in St Mary’s Church, Tipperary, where his father-in-law, the Reverend Robert Popham Bell, was the vicar.

The body of Lieutenant Colonel Lyle was found by the Divisional Commander Major General Ingouville-Williams on 13th July, the General wrote to his wife: "I have just been reconnoitering and found poor Colonel Lyle's body, surrounded by Tyneside Scottish, Northumberland Fusiliers, all dead, a most grievous site to me, who loved my faithful soldiers 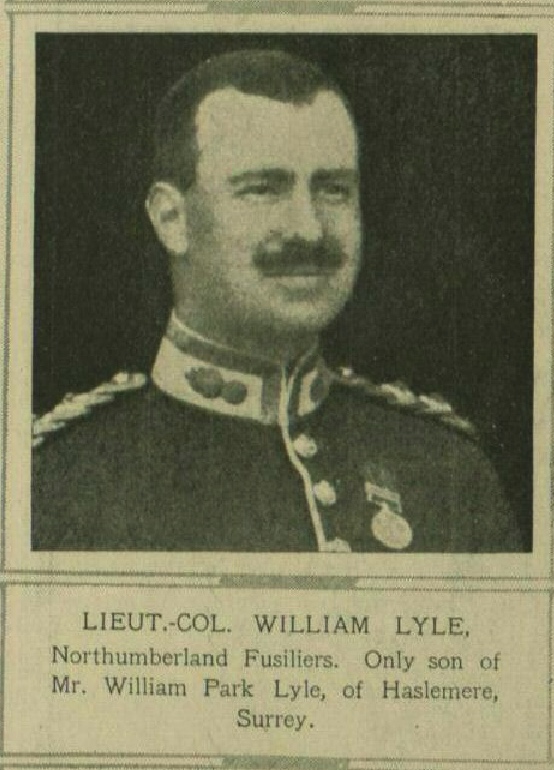