We regret to announce the death of Second Lieutenant W. E. Maitland from wounds received in action. Lieutenant Maitland, the son of Mr. George Maitland, of Kilmacolm, studied medicine in Glasgow University, where he took the degree of M.B., Ch.B., in 1913. After graduation he became house surgeon in the Royal Infirmary with Mr. Paterson, and thereafter was engaged in the outdoor department of the Western Infirmary. He returned to the Royal Infirmary in April of last year as house physician under Dr. Mackenzie Anderson. In 1909 Lieutenant Maitland joined the Officers' Training Corps, University Contingent, in which he was subsequently gazetted to a commission. Throughout his career as a student he was prominent as an athlete, and had played in the first Rugby fifteen for several seasons. At the outbreak of war Lieutenant Maitland transferred his services to the Special Reserve of Officers, from which he was gazetted to the 3rd Battalion Seaforth Highlanders. Popular with his fellow-students, among whom he had many friends, he was also devoted to his work, and his death on 24th December, 1914, at the age of 25 years, has cut short the promise of a brilliant career.

William Ebenezer Maitland was a native of Kilmacolm. He attended Glasgow High School before attending the University of Glasgow where he studied medicine. He won class certificates in Physics, Practical Zoology and Diseases of the Throat and Nose, and went on to obtain his degree (MB ChB) in 1913.

He was working as house physician in Glasgow Royal Infirmary at the outbreak of war. He took a commission as 2nd Lieutenant in the Third Battalion of the Seaforth Highlanders from August 15th 1914 and was soon drafted to the front with the 2nd Battalion of the Black Watch, to which he had been gazetted.

Second Lieutenant Maitland was wounded in the trenches 500 yards from Richebourg l'Avouve on 21st December 1914. Sadly he did not make it home for Christmas, dying from wounds on Christmas Eve.

William Maitland was fondly remembered by his university friends. 'Teddy' was remembered as one of the kindest-hearted and most genuine of men. He was popular in the rugby team and is said to have spent many hours improving his ruby skills and trying to impart to others the same love of sport, clean living and fresh air that inspired him. His life was cut short at the beginning of what promised to be a brilliant and useful career, leaving many to mourn his loss. 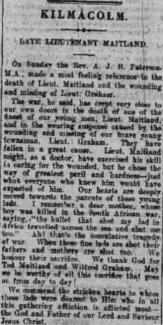 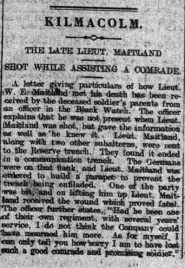 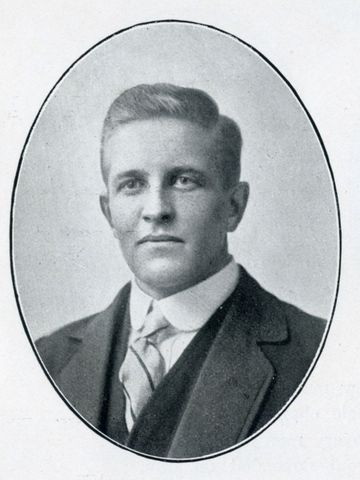