Samuel Gilmour was born on Burns Night on 25th January 1888, and at the age of 20, the young Samuel Gilmour married Mary Rankin on 5th May 1908 at 3 Clune Place, Port Glasgow. He had four children, one Son whom he named Samuel, and three Daughters Jeannie, Susan and Mary.

His only Son, Samuel Gilmour married Mary Kirkwood, who was my Mothers Sister, on 28th December 1945. He in turn had three Children, calling his first Son Samuel Gilmour, a Daughter Elizabeth and another Son James

Despite the death of Private Samuel Gilmour at the young age of 27, he still has a number of descendants who remember him today. His Grandson, Samuel Gilmour, my Cousin, emigrated to Canada in 1972 with his wife and baby Daughter, Samantha. In 1974 Samuel had another Son Callum, born in Canada. Samantha married a Canadian, Greg Howe and they have a family in Canada.

Private Samuel Gilmour was a very brave young man who made the ultimate sacrifice for his King and Country, and for Freedom and Honour.

Private Gilmour’s Canadian and Port Glasgow relatives are extremely proud of his bravery in performing his duty to the very best of his ability in the Gallipoli Campaign. It is through his family that he lives on, and will never be forgotten. Info from Bill Lindsay 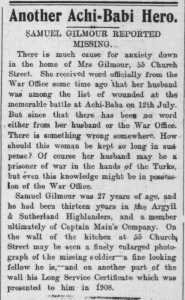 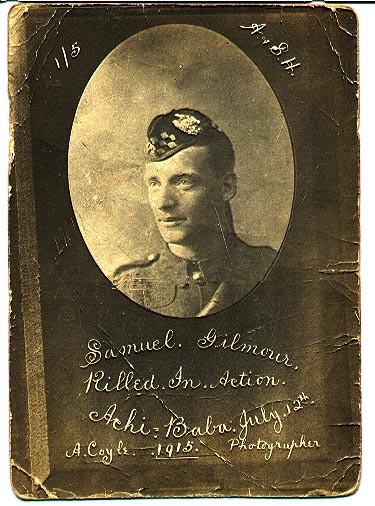