Lived at Willisons Lane, Port Glasgow. Born at the Dockhead. He was in St John's Boys Brigade. Worked as a Screwer Up in the Glen Yard. He sailed with a Fergusons built dredger on its way to Australia. On the outbreak of war he left the ship and joined up.

Awarded Military Medal for bravery while serving in France

Attested on 5/9/1914 at Roseberry Park Camp. Wounded in foot at Galipoli. Also had finger removed due to gangrene. Sent to England to recover. Rejoined his unit in France where he was again injured with a gunshot wound to the arm. He was promotoed to CSM on 28/3/1918 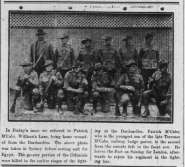