Max parents Margaret Douglas and Alexander Macpherson married in Ocendon Presbyterian Church, Haverstock Hill, London on 24 May 1888.  Their first child, Douglas, was born in 1889 and Max on 13 February 1892. A daughter, Mary, was born in 1893 but died in 1894. Both parents were Scottish, Alexander from Banffshire and Margaret from Edinburgh.

Margaret was the eldest daughter of Archibald and Jane Douglas and her sister Rachel, my grandmother, was their youngest. In all the Douglas family totalled five daughters and two sons all born in or near Edinburgh. The Douglas family moved to London c1875 and the 1881 census shows that Margaret, along with three of her sisters, and one brother were living with their parents at 10 Queens Crescent, Haverstock Hill.

It is likely that Margaret and Alexander met in London and they were living at Guildford Street, Bloomsbury at the time of the 1891 census along with Douglas, age 1, and Lizzie Dixon a domestic servant.  Margaret and her son's, Douglas and Max, next appear in the 1901 census when they were living at 16 Kempock Street, Inverkip. The 1911 census shows that Margaret and Douglas were living at Western House, West Renfrewshire (Inverkip Parish). The same census has Max, age 21, boarding with Annie Sharpe at 74 Belgrave Road, Glasgow - presumably when he was studying at a college. Ian Macpherson, age 19, was also a boarder born in Dufftown – a possible relative.

Max’s Service Records include an “Application to a commission in the special reserve of officers” date stamped 8 October 1914. This shows that he was educated at Grey College, Bloemfontein (and various others). The archivist at Strathclyde Council records that Max was a pupil at Greenock High School. The Service Records show that Max attended Evening Classes at the Royal Technical College, Glasgow in 1910-11, 1911-12, and 1912–13 as an Apprentice Civil and Mining Engineer. Max’s address is given as 238 West George Street, Glasgow. Captain E P Cathcart, Commanding Officer of the Glasgow University Officer Training Corps, confirmed that Max had been “returned as efficient” in 1912.13.14 and “attended camp” in the same years and “I certify that I can recommend Cadet M Macpherson as a fit and proper person for appointment to a commission in the branch of the Special Reserves for which he applies”

From notes prepared by my father, Thomas Douglas Hamilton (1908 - 2008) Max’s father, Alexander, emigrated to South Africa and his address is given as Pretoria as Douglas's next of kin in 1919. A newspaper cutting in the University of Glasgow Archives reported that Max was "Educated at Grey College, Bloemfontein, he was an apprentice with Messrs Rankine and Sons, civil and mining engineers, Glasgow, at the outbreak of the war. He joined the Army immediately on the outbreak of hostilities, having been previously in the O.T.C (Officer Training Corp) in Glasgow."

It would appear that Max was studying civil and mining engineering at college and also worked as an apprentice for Rankin and Sons at the same time. This practice ran in parallel to full time civil engineering degree courses with both routes being accepted as the educational element in an application for Membership of the Institution of Civil Engineers into the mid 20th Century.  The Royal Technical College began in 1796 as the Anderson’s Institution and became the University of Strathclyde in 1964.

Max joined his Regiment, the Seaforth Highlanders (Ross-shire Buffs, the Duke of Albany's) at the start of WW1. The Seaforth's were based at Fort George near Inverness. His service records includes a letter to his mother (living in Largs) that he was wounded on 9th April 1915 and he had been admitted to the Red Cross hospital and then to a General Hospital at Le Treport (on the Channel Coast south of the Somme esturary) At the time he was a sub- lieutenant. This event is also noted on a return prepared by the Vice Chancellor of the University of Glasgow listing students and members of the OTC killed or injured. There is no record that he returned home to convalesce.

When he was 25 Max married Lucy Mary Crawshaw, age 26, on 14th August 1917 in St Mary's (Episcopal) Cathedral, Glasgow. Canon W J Howell, Rector of St Bartholomew's (Episcopal) Church in Gourock, officiated at the service. Max's profession is given as a Civil and Mechanical Engineer and Captain in the 21st Seaforth Higlanders with his address as Southcroft, Largs "presently in France". His father's profession was given as "Accountant Civil Service" but not where he was living.

The census for 1911 shows that Lucy and Grace her twin sister, age 19 and their mother, Agnes, were living at 22 Aberfeldy Street, Dennistown, Glasgow. The girls were born in Russia with the note under the heading Nationality “British by Parentage”. A red note stated that the “Head was absent.”

In recognition of his service Max qualified for the British Star and Medal. He was mentioned in Sir Douglas Haig's despatch of June 25 1917. By October 1917 the Seaforth’s were in Flanders.

Max was killed in action near Poelcapelle in Belgium on 4th October 1917 he had the rank of Captain 3rd Battalion, attached to the 1st Battalion.

" The Battalion took part on the attack made on the 4th October. Everything went well until the company had almost reached its objective, when Captain Macpherson was hit by a machine gun bullet in the leg, and was unable to advance further, although he was comfortable and in no pain. He sent back the most capable report of the situation and a stretcher party was at once sent out to fetch him in. He was placed on a stretcher and was being carried in, when a bullet passed through his head, an instantaneous death.

"No one served his regiment more faithfully than Captain Macpherson, and no one will be more deeply missed on every hand. Officers, NCOs, and men look back upon his death as a heavy loss to this regiment. He had served longer than any other officer, and was loved and honoured by all. Your husband died as he had lived, a brave man, doing his duty to the last, and happy in the knowledge that he was serving his country and the regiment he loved." 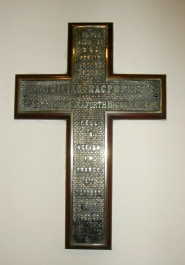 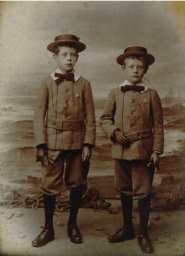 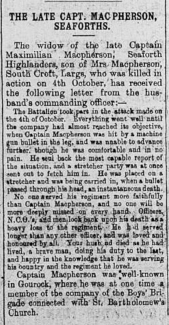 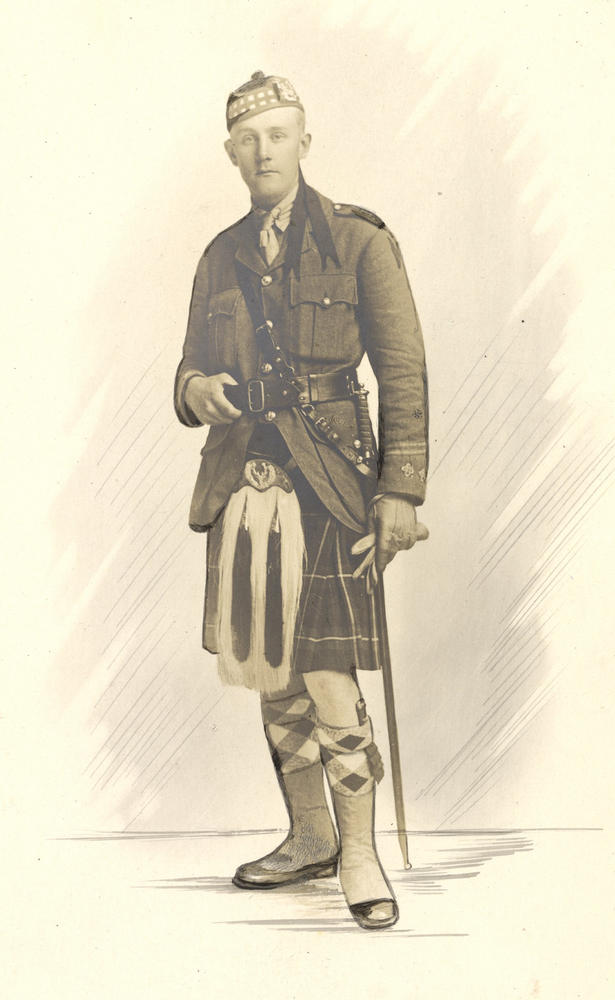