The sad intelligence reached Port Glasgow on Monday that Harry McKinnon, only son of Alexander & Mrs McKinnon, Morrison's Buildings, The Glen, had been killed in action in France. Decaesed, who was in the KOSB had served three eyars with the A & SH and was later transferred tot he KOSB. It is a year come february since Harry visited his old home in the Port. He was a fine strapping big fellow and had served four years of his apprenticeship as a riveter in Messrs William Hamilton & Co's Glen yard. It may be remembered that it was the KOSB, 2nd Battalion, that was in the riot at Dublin and Harry McKinnon was with the regiment then. They went straight from Dublin to the seat of the war and Harry was through every engagement from the beginning until he was mortally wounded with shrapnel shot. he was taken into hospital in France but succumbed a few days later to his injuries. Only a few days ago his mother received a postcard, in which he said that they were fighting night and day and sometimes all night. He said the filed of battle was more like a big butchers shop than war. ALong with the letter from the War Office on announcing Harry's death was the usual letter from Lord Kitchener conveying the sympathy of the King & Queen. The last letter which Harry McKinnon wrote home was to his sister, Mrs Blackwood, now residing in Irvine.

Dear Sister, a few lines to let you know I am keeping well, hoping to find you the same. I got your welcome letter all right; it was a fortnight on the way. Dear Nellie we have been having a hot time here. We have been in action five times and we have lost a terrible lot of men, but not so many as the Germans. I ahve not seen Beattie here. There are so many here that you never see half of them. Dear sister, I hope you will write home and tell my mother you got this letter, and that I will write one the next mail. You might try and send me some fags, and tell mother to send a pair of socks, as we have marched hundreds of miles. dear ister, I hope this will reach you alright. Tell Andie if I am spared we will have a good time with the money when I come home, as they have given us no pay since we came. I have no more to say at the present, so I will close, hoping the kids are all right, from Harry 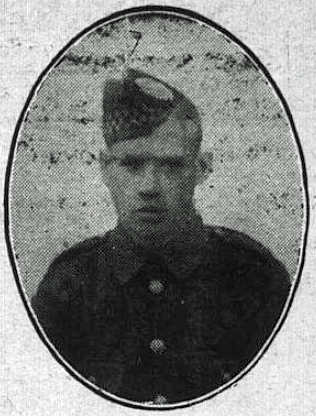