Edwin was son of William Burling and Katharine Eleanor Abbey, 1606 Mifflin Street, Philadelphia, and the brother of Susan Margery. He was born September 22nd 1888, Mt. Holly, NJ, educated at St. Marks School and undertook a degree in Civil Engineering at Pennsylvania University, where he was a member of the Civil Engineers Society and the Delta Phi Fraternity. The summer of 1915 saw him in Canada supervising the construction of Shawcreek Bridge. After the sinking of the Lusitania Edwin battled with his sense of duty and humanity, writing “dishonour to the flag is great … honour demands that we enter the war, humanity that we stay out”. Ultimately Edwin felt an overwhelming call to the defence of humanity and enlisted October 2nd 1915 in Toronto.

Enlisted in Toronto with the Canadian Forces. Next of Kin William Burling Abbey (father), 523, Chestnut Street, Philadelphia, Pennsylvania, U.S.A.  He falsely stated that he had been born in Kilmacolm to be allowed to enlist; a decision supported by his parents, who too felt America had lost its moral centre.

By early December 1915 Edwin found himself overseas. He regularly wrote home to his parents telling of his experiences. These letters were published after his death  entitled “An American Soldier” in 1918 and give a window in what he experienced and the beliefs that led him there. Edwin was injured April 23rd 1916 when he was shot through the left shoulder and spent some time  recovering at  Kings Hospital, London. While in London he had the chance to visit friends and family and attended services at St. Pauls. He returned to France, December 16 1916. On April 10th 1917 Edwin was at Vimy Ridge  defending a strategic spot he had argued to continue defending due to its significance. He had recently discovered that America had entered the war and wrote of his “joy” that he was fighting for his own country. Shortly after dawn on April 10th Edwin was shot through the heart by a German sniper and killed. Edwin was buried close to where he fell surrounded by his fellow officers and men with his face to the enemy lines. His family erected a cenotaph for him at the family plot in Mt. Holly, NJ.

A letter dated April 6th, 1917 found in Edwin’s kit after his death: “I do not think of death or expect it, but I am not afraid of it, and will give my life gladly if it is asked … My heart is full of gratitude for having such love as they have give me... Now, dearest mother and dearest father, I will say goodbye for a time … All my love, and God bless you both. Your Son." 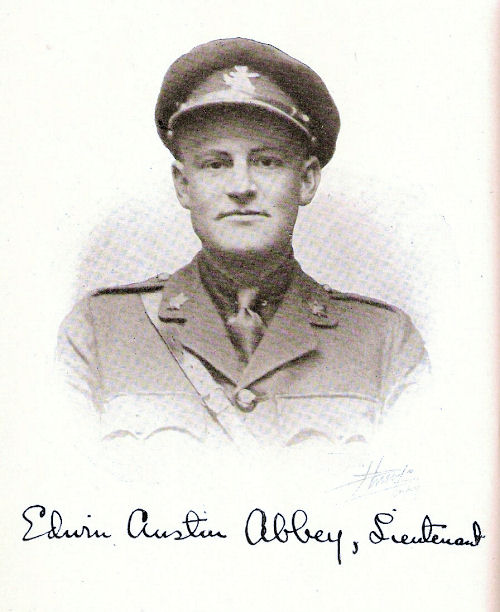