SON OF THE LATE JAMES AND ELIZABETH FORBES, OF 7 BRUCE Street, GREENOCK, RENFREWSHIRE. Worked for a Glasgow egg importer. He was a keen sportsman and member of Greenock Art Club.

Info from http://www.36thulster.com/archie-forbes.html Archie Forbes was a son of James and Elizabeth Forbes of John Street in Ballymoney.

The family appears to have moved at some stage to live in Scotland as reference is made to them as living at No 7, Bruce St, Greenock. At any rate Archie enlisted into the 2nd battalion of the King’s Own Scottish Borderers and after a lengthy period spent training, they moved to France. They were to be at the Somme for two and a half months. On 19th July they marched from Fricourt across country towards High Wood. After dark the battalion was guided to the old German second line between Bazentin-le- Grand and Guillemont, and took up position. Their first objective was Wood Lane, a sunken road on the other side of a slight rise about 400 yards away.

350 yards up a gentle slope, over the top and then 50 yards in full view of the enemy.

The attack started at 3.30am and they took their objective, which they held all day, being relieved by the Royal Warwickshire Regt that night.

Their ultimate objective, the German third line, “Switch Trench”, ran east from the north of High Wood. Heavy fighting took place here in an attempt to take High Wood and after a few days the 2nd battalion were taken back for rest.

On the evening of the 29th the battalion left their rest area at Pommiers Redoubt to relieve the 95th Infantry Brigade at Longueval, on the west side of Delville Wood.

It was a perilous post, spattered all day with gun and machine-gun fire, and casualties came thick and fast. They managed to hold on and although not much was achieved, they had done what they had been sent to do. After a long drawn out, difficult relief by the 15th I.B. the battered K.O.S.B. crawled back in small parties, in the small hours of the 31st, to Pommiers Redoubt. They had lost 244 men. It was in the process of this relief that Archie was killed on the west side of Delville Wood. He has no known grave and is commem- orated on the Thiepval Memorial.

An advertisement placed in the Greenock Telegraph in April 1999 asking the family to get in touch has produced a lot of information and in this case has been well worth while.

Before he enlisted Archie was a shipping clerk with a local provisions company in Greenock. He was a superb artist and had a number of works published in the Greenock Telegraph and did all the art work for the Company Magazine of the Greenock Boys Brigade. He also played cricket at Greenock as an opening batsman and it is believed that he represented Scotland.

Remembered at Thiepval Memorial, France. Pier and Face 4 A and 4 D. 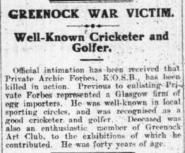 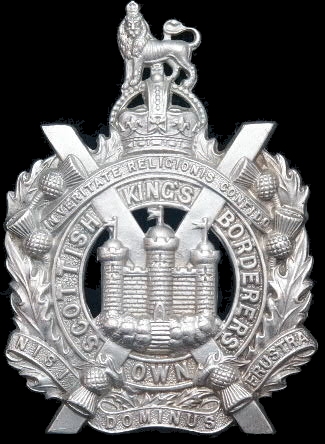