The Scottish Medical Service Emergency Committee controlled the enrolment of doctors in Scotland during the First World War. It was headquartered at the Royal College of Physicians of Edinburgh and the College was asked to be custodian of the records in 1920.To gather information, the Committee sent out forms to all medical practitioners across Scotland between December 1915 and 1919. The index contains information transcribed from these forms. Registration Forms were submitted by practitioners not holding Commissions from the Royal Army Medical Corps or the Royal Navy, and Intimation forms were submitted by or on behalf of practitioners on active duty. The registration forms give more information and indicate what work the practitioner was willing to undertake. The intimation forms are often signed by other family members.

noted on paperwork "At present on a weeks leave from France" 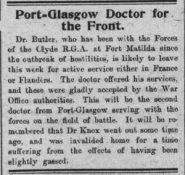